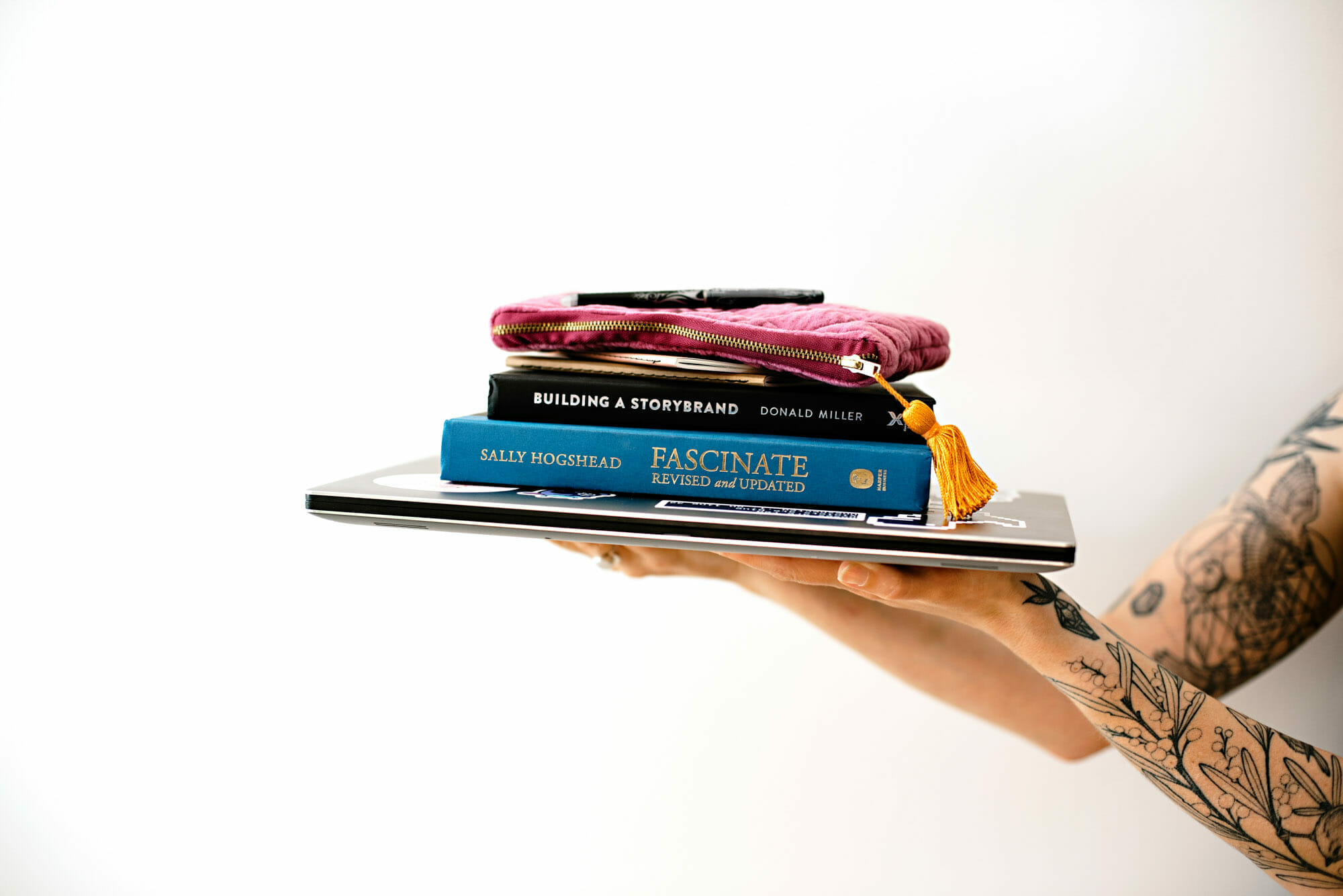 5 of the Best Business Books Entrepreneurs Need to Read

Right on, Marie. More about her (and her fabulous hair) later in the post.

NEWSFLASH: Unless you’re a successful, child-free, solopreneur with money to burn – the rest of us are busier than ever in lockdown.

Here’s a truth about entrepreneurship – it’s a journey with lessons to teach. We get it. Right now, we’ve come up against one of the most unexpected obstacles in the modern era. Successful businesspeople are adaptable- sure. But if you are spinning about just HOW to adapt yesterday, we’ve got your back.

With a sea of business resources from every possible viewpoint, it’s difficult (and time-consuming) to fish out the best (and most relevant) information. As someone who works from home in non-pandemic times, We wanted to help share our favourite business books entrepreneurs need to read to grow their businesses in this *interesting* environment. Business books 2020 – here’s our list. 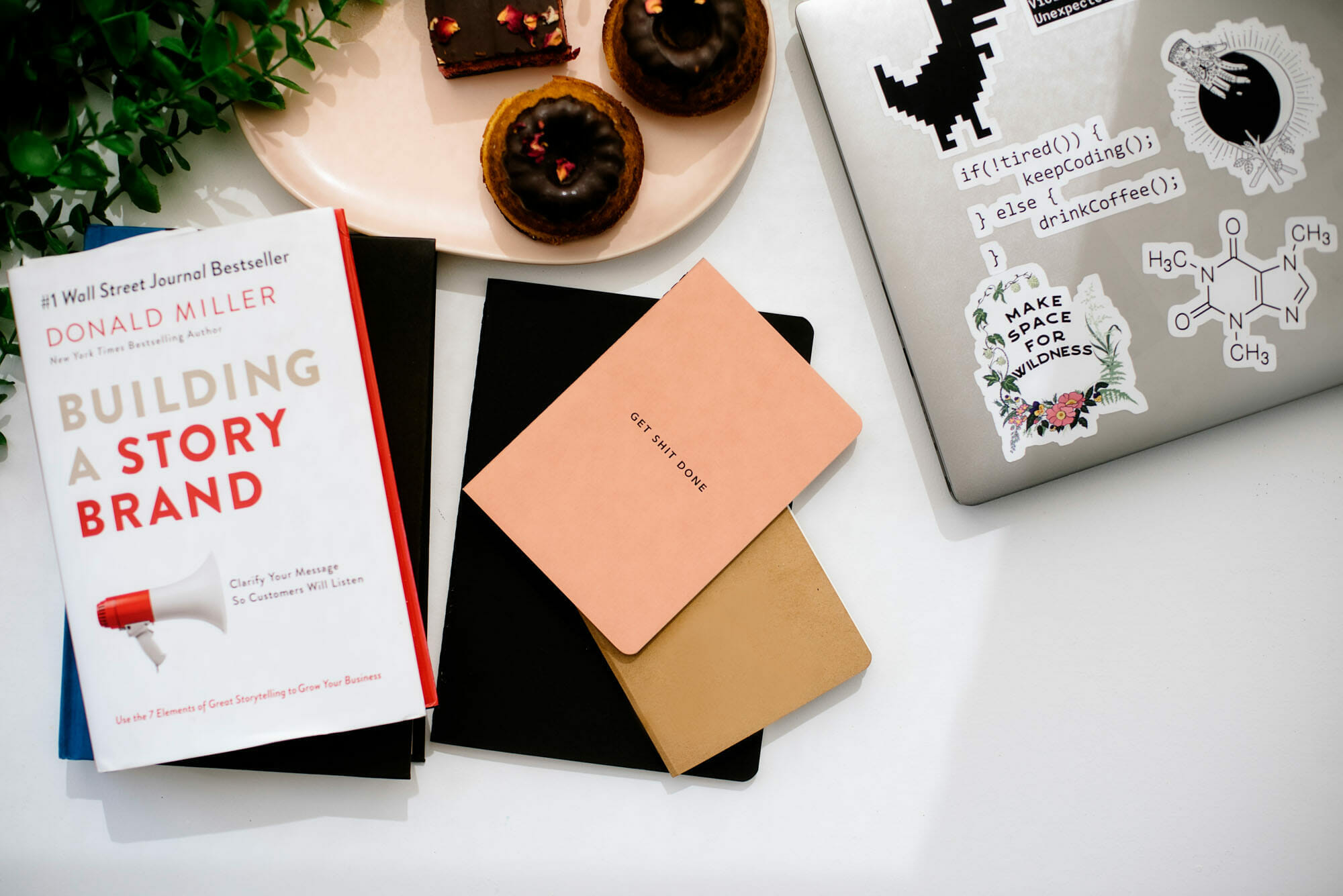 1. Building a StoryBrand by Donald Miller

My brain lit up like a pinball machine while reading this book. “YES! Ding! Tilt, tilt!!!” I even wrote-on and dog-eared the pages (total sacrilege, I know) because there are passages which I refer to often.

This book asks us to remove ourselves/ our brand as the hero of the story and instead – create a narrative for our customer to become the hero. TILT!!!!

Our brand becomes the trusted advisor to our client’s hero character. We are Yoda, and they are Skywalker. It’s our job to guide them through their challenge to a successful ending. We need to advise, caution them, maybe even warn them about who their father really is. We help the hero by giving them the tools they need to succeed.

Building a StoryBrand has you complete a BrandScript – seven super helpful steps which complete the profile of your brand, your client, and how you help them.

You can see why this 7 step framework is pivotal not only to our brand work but our website work, too.

Read this book before embarking on any marketing or content creation and clear your, and ultimately your customers’, confusion.

2. Fascinate: How to Make Your Brand Impossible to Resist by Sally Hogshead

We’ve all done Myers-Briggs personality tying, right? Two INFJ’s over here! (How does that even happen to business-pals? Meant to be). Sally has turned this sort of test on its head, er um, Hogshead (it’s her actual surname, Sally Hogshead)! I digress.

Myer’s Briggs looks at how we work on the inside, whereas Fascinate looks at how others perceive our brand. There is a personality test too in the sister book Fascinate: How the World Sees You.

The brilliant part of this book is once you take the online test for your brand and find it’s core strength you’re given a series of cues, adjectives, and marketing plans to make the best of it. SO. HELPFUL. You can then take this core strength and implement other strategies around it. Also, very helpfully laid out in this book.

Combined with StoryBrand, these two form our core reading list for clients. They are a never-ending source of remarkable new ideas all with your audience at the forefront.

3. The Middle Finger Project: Trash Your Imposter Syndrome and Live the Unf*ckwithable Life You Deserve

Ash encourages us to consider the source of this sometimes heartfelt, often hurtful advice. Only take advice from people getting their bums kicked in the same field as you. Only take notice from people who have already done what you are trying to do.

You can probably tell with the serious amount of tattoo collecting between us, but Dawn and I don’t ‘do as we’re told.’ So, no surprise we love this rags-to-riches story about a rebel-chick succeeding in a dude’s world.

Hilarity will ensue. Boundaries will stiffen (no pun intended). Examples will lead the way forward with a pointy middle digit- directly up and through that glass ceiling.

Ash’s book is a requiem for Imposter Syndrome, a memoir to rukus and courage. What a wicked chick who is always cheering for her fellow, scrappy sisters.

Ash has built herself an empire doing what she has been told not to, and she’s damn inspiring.

4. Everything is Figureoutable: How One Simple Belief Can Help Us Overcome Any Obstacle and Create Unstoppable Success by Marie Forleo

“If you believed to your core that everything really is figureoutable, what would you now do? What would you create or heal or transform or transcend? Who would you become?”

If you don’t know Marie Forleo, brace yourself for a whirlwind marketing maven, a New York accent and best blow-wave you. Have. Ever. Seen.

Her formulas are proven successful by entrepreneurs in every field and, hullo- she’s been on Oprah.

Marie gives us nine steps to work through complex problems. There is always something you can do to improve any situation. To make some tastier lemonade, add a boatload more sugar. Or Gin (my advice, not Marie’s). At the end of each chapter, she challenges to take her insights and turn them into action. You gotta do the werk, werk, werk before you see results.

This book can change your attitude to your whole life and help you take your power back in not fun situations.  You will have several lightbulb moments, I promise!

5. Marketing Made Simple: A Step-by-Step StoryBrand Guide for Any Business by Donald Miller

So now you have your brand sorted and understood… what if no one finds you? Was all that work for nothing?

Don has developed a 5 step checklist to help you implement the StoryBrand and get your message out there, communicated clearly, and connecting with that ideal audience.

Easy to read, easy to follow, and so essential to implement. It’s a new release and we are working our way through it now. It’s destined to be a dog eared and well thumbed book like it’s sibling.

So get your eyes on these books and be sure that you’ll be the ready to Karate Chop your way through the Internet’s white noise, find your audience, and craft a narrative that will make them fall in love with your brand.

If you love this list – share it on your socials! Handy lil buttons pop up when you hover over the image (so cool right!)

← Are you ready for a web designer or web developer? How to choose a font for your brand →